A new concept for low-cost batteries 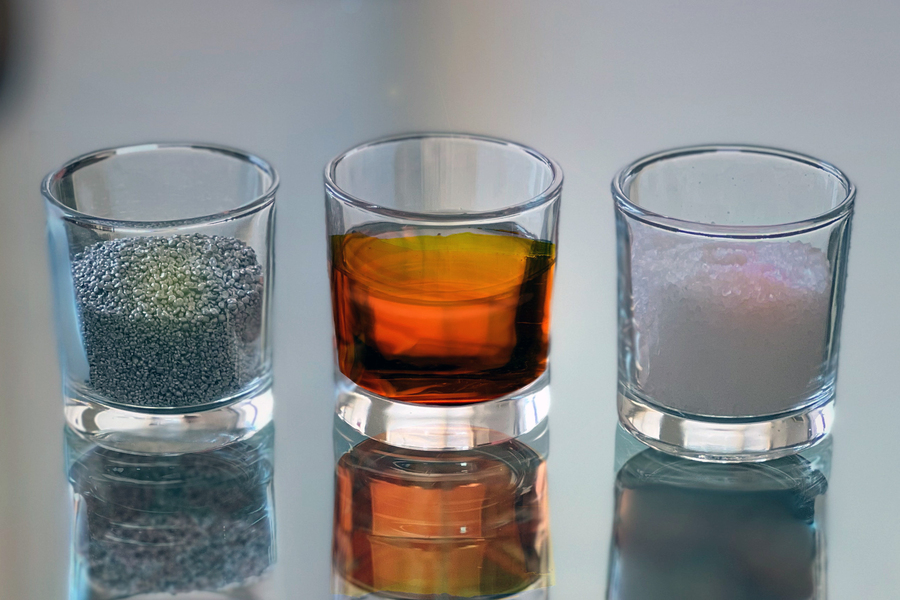 The three primary constituents of the battery are aluminum (left), sulfur (center), and rock salt crystals (right). All are domestically available Earth-abundant materials not requiring a global supply chain.

As the world builds out ever larger installations of wind and solar power systems, the need is growing fast for economical, large-scale backup systems to provide power when the sun is down and the air is calm. Today’s lithium-ion batteries are still too expensive for most such applications, and other options such as pumped hydro require specific topography that’s not always available.

Now, researchers at MIT and elsewhere have developed a new kind of battery, made entirely from abundant and inexpensive materials, that could help to fill that gap.

The new battery architecture, which uses aluminum and sulfur as its two electrode materials, with a molten salt electrolyte in between, is described today in the journal Nature, in a paper by MIT Professor Donald Sadoway, along with 15 others at MIT and in China, Canada, Kentucky, and Tennessee.

“I wanted to invent something that was better, much better, than lithium-ion batteries for small-scale stationary storage, and ultimately for automotive [uses],” explains Sadoway, who is the John F. Elliott Professor Emeritus of Materials Chemistry.

In addition to being expensive, lithium-ion batteries contain a flammable electrolyte, making them less than ideal for transportation. So, Sadoway started studying the periodic table, looking for cheap, Earth-abundant metals that might be able to substitute for lithium. The commercially dominant metal, iron, doesn’t have the right electrochemical properties for an efficient battery, he says. But the second-most-abundant metal in the marketplace — and actually the most abundant metal on Earth — is aluminum. “So, I said, well, let’s just make that a bookend. It’s gonna be aluminum,” he says.

Then came deciding what to pair the aluminum with for the other electrode, and what kind of electrolyte to put in between to carry ions back and forth during charging and discharging. The cheapest of all the non-metals is sulfur, so that became the second electrode material. As for the electrolyte, “we were not going to use the volatile, flammable organic liquids” that have sometimes led to dangerous fires in cars and other applications of lithium-ion batteries, Sadoway says. They tried some polymers but ended up looking at a variety of molten salts that have relatively low melting points — close to the boiling point of water, as opposed to nearly 1,000 degrees Fahrenheit for many salts. “Once you get down to near body temperature, it becomes practical” to make batteries that don’t require special insulation and anticorrosion measures, he says.

The three ingredients they ended up with are cheap and readily available — aluminum, no different from the foil at the supermarket; sulfur, which is often a waste product from processes such as petroleum refining; and widely available salts. “The ingredients are cheap, and the thing is safe — it cannot burn,” Sadoway says.

In their experiments, the team showed that the battery cells could endure hundreds of cycles at exceptionally high charging rates, with a projected cost per cell of about one-sixth that of comparable lithium-ion cells. They showed that the charging rate was highly dependent on the working temperature, with 110 degrees Celsius (230 degrees Fahrenheit) showing 25 times faster rates than 25 C (77 F).

Surprisingly, the molten salt the team chose as an electrolyte simply because of its low melting point turned out to have a fortuitous advantage. One of the biggest problems in battery reliability is the formation of dendrites, which are narrow spikes of metal that build up on one electrode and eventually grow across to contact the other electrode, causing a short-circuit and hampering efficiency. But this particular salt, it happens, is very good at preventing that malfunction.

The chloro-aluminate salt they chose “essentially retired these runaway dendrites, while also allowing for very rapid charging,” Sadoway says. “We did experiments at very high charging rates, charging in less than a minute, and we never lost cells due to dendrite shorting.”

“It’s funny,” he says, because the whole focus was on finding a salt with the lowest melting point, but the catenated chloro-aluminates they ended up with turned out to be resistant to the shorting problem. “If we had started off with trying to prevent dendritic shorting, I’m not sure I would’ve known how to pursue that,” Sadoway says. “I guess it was serendipity for us.”

What’s more, the battery requires no external heat source to maintain its operating temperature. The heat is naturally produced electrochemically by the charging and discharging of the battery. “As you charge, you generate heat, and that keeps the salt from freezing. And then, when you discharge, it also generates heat,” Sadoway says. In a typical installation used for load-leveling at a solar generation facility, for example, “you’d store electricity when the sun is shining, and then you’d draw electricity after dark, and you’d do this every day. And that charge-idle-discharge-idle is enough to generate enough heat to keep the thing at temperature.”

This new battery formulation, he says, would be ideal for installations of about the size needed to power a single home or small to medium business, producing on the order of a few tens of kilowatt-hours of storage capacity.

For larger installations, up to utility scale of tens to hundreds of megawatt hours, other technologies might be more effective, including the liquid metal batteries Sadoway and his students developed several years ago and which formed the basis for a spinoff company called Ambri, which hopes to deliver its first products within the next year. For that invention, Sadoway was recently awarded this year’s European Inventor Award.

The smaller scale of the aluminum-sulfur batteries would also make them practical for uses such as electric vehicle charging stations, Sadoway says. He points out that when electric vehicles become common enough on the roads that several cars want to charge up at once, as happens today with gasoline fuel pumps, “if you try to do that with batteries and you want rapid charging, the amperages are just so high that we don’t have that amount of amperage in the line that feeds the facility.” So having a battery system such as this to store power and then release it quickly when needed could eliminate the need for installing expensive new power lines to serve these chargers.

The new technology is already the basis for a new spinoff company called Avanti, which has licensed the patents to the system, co-founded by Sadoway and Luis Ortiz ’96 ScD ’00, who was also a co-founder of Ambri. “The first order of business for the company is to demonstrate that it works at scale,” Sadoway says, and then subject it to a series of stress tests, including running through hundreds of charging cycles.

Would a battery based on sulfur run the risk of producing the foul odors associated with some forms of sulfur? Not a chance, Sadoway says. “The rotten-egg smell is in the gas, hydrogen sulfide. This is elemental sulfur, and it’s going to be enclosed inside the cells.” If you were to try to open up a lithium-ion cell in your kitchen, he says (and please don’t try this at home!), “the moisture in the air would react and you’d start generating all sorts of foul gases as well. These are legitimate questions, but the battery is sealed, it’s not an open vessel. So I wouldn’t be concerned about that.”