HINDUTVA IS NOT HINDUISM

Hindu supremacists have made a concerted effort over several decades to equate their manufactured term “Hindutva” with Hinduism. From the early twentieth century onwards, they have worked hard to shield themselves from legitimate critique for their extremism by claiming to speak for a persecuted Hindu community, despite Hindus being a sizable majority in India. Most recently, they have been leveraging the language of being a religious minority in the United States to evade criticism of their supremacist ideologies.

However, the distinction between “Hindutva” and Hinduism has been stark: Hindutva is a political philosophy styled after European fascism of the early twentieth century, an ideology that privileges a cult of personality and authoritarian leadership. By contrast, Hinduism is a term used to describe a wide range of religious practices and beliefs that are heterodox, and like the practices and beliefs of any major religion with hundreds of millions of followers, continuously under contestation, and often contradictory. Hinduism has rightly been critiqued for the deep inequities in Indian society, most importantly for the caste system. Many Hindu reformers have also offered these critiques.

In the Indian subcontinent, Hindusim has also been shaped by syncretic faiths such as Sufism, which is a form of mysticism that broke away from orthodox Islam, and by poets and visionaries who adopted it into local idioms. The Bhakti movement which spread from South India to the North and East is one example—its most famous poet, Kabir, was venerated by Muslims and Hindus alike.  Hindus, Muslims, and Christians have a history of praying at Sufi shrines, as well as in temples, mosques, and gurudwaras and other shrines. There is also much borrowing from Hinduism into other religions practiced in India. These are the rich histories of Hinduism that Hindutva seeks to obliterate and disavow.

Hindutva refuses these critiques, as well as such syncretic faiths, and instead doubles down on using supremacist tools in the service of a toxic and genocidal unifying theory of a “Hindu Rashtra” or Hindu nation. In other words, instead of recognizing the plurality and the changes and debates within Hinduism, Hindutva demands an unquestioned allegiance to a myth-oriented, hate-mongering dogma that reifies and sanctions its violent modes of operation.

To equate Hinduism and Hindutva is to fall into the narrow, bigoted, and reductionist fiction that instrumentalizes Hinduism by erasing the diverse ppractices of the religion, the debates within the fold, as well as its conversations with other faiths. If the poet A. K. Ramanujan reminds us about the importance of acknowledging “three hundred Ramayanas,” then Hindutva seeks to obliterate that complexity into a monolithic fascism.

It is akin to equating Judaism and Zionism. Judaism is a legitimate religion whereas Zionism is just hate propaganda.

CLICK THE IMAGES BELOW FOR RESOURCES FOR PRACTICING HINDUS: 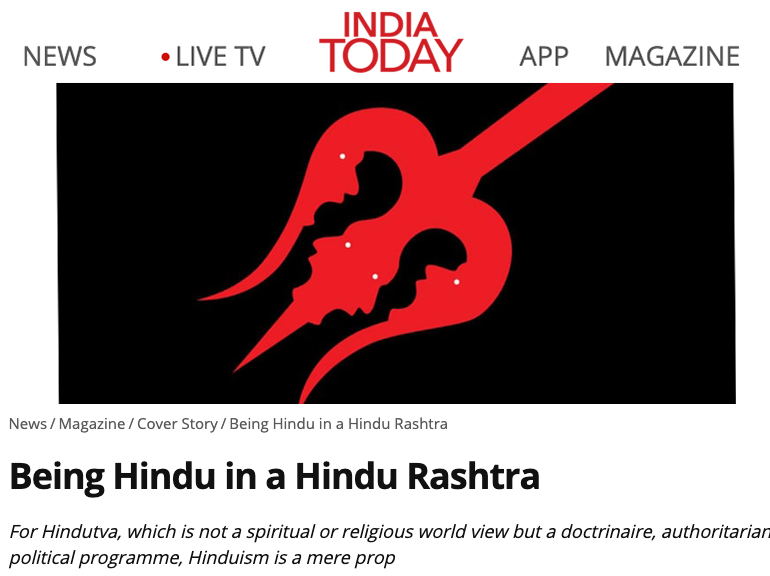